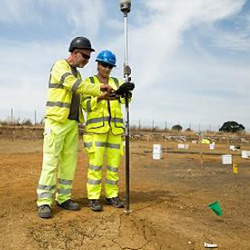 Since 2016 I’ve been working for Headland Archaeology as Survey Coordinator/Supervisor on the A14 Huntingdon to Cambridge Reroute and Improvement Scheme; a major project undertaken by MOLA Headland Infrastructure (MHI) on behalf of Highways England.

Trial trenching started in August 2016 and area excavations the following October, resulting in the archaeological investigation of 350ha and the excavation of over 41,500 features.

Apart from an occasional site supervision or watching brief interlude, my main role involves survey training and technical support for over 100 archaeologists across 35 targeted excavations, the tracking and management of all associated Total Stations and DGPSs, CAD work, survey audits and earthwork surveys.

I introduced archaeological survey to around 80 volunteers on MHI/A14’s Community Dig and found my first handaxe on a watching brief of a Palaeolithic site with MHI’s Consultant Specialist Bill Boismier, as we recorded ancient sediments and retrieved woolly mammoth and rhino bones.

Gaining Associate accreditation with CIfA has been avery positive experience; a great opportunity to reflect on all the interesting experiences I’ve had, as well as providing independent recognition of the skills and knowledge I’ve acquired.