Applying as a Project Officer 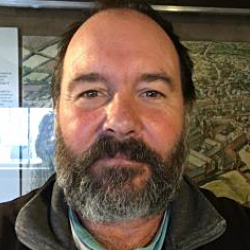 My career in archaeology began in 1981 when I was given the opportunity to work as a volunteer on the Baulksbury excavations near Andover, Hampshire, with the old Central Excavation Unit. I settled in Winchester where I completed a year’s fieldwork experience and training on a Manpower Services Commission (MSC)-funded excavation in the city. I was employed by Winchester City Council Museums Service as a Site Assistant and then Supervisor. During this time, I was active with the group ACT (Archaeologists, Communicate, Transform), a short-lived attempt to form some kind of union body specifically for archaeological field staff.

Following this I worked in various places including North Devon District Council, Essex County Council, and as a self-employed specialist. I now work with Canterbury Archaeological Trust as a Project Officer. My job is a rewarding and enjoyable one. I am fortunate to work with fellow project officers, senior site staff, managers and the unit director, who, like myself, all have their roots in fieldwork. My duties are varied and include involvement in all stages of a project from the initial setting-up, directing the excavations and supervising and training staff of all abilities, through to the processing of site data and the preparation of texts and figures for publication.

I was delighted to be accepted as MCIfA, partly to be able to obtain a CSCS card but more importantly for the recognition of my fieldwork experience – proving it is possible for ‘old diggers’ like myself with no academic qualifications to be recognised for the very important role they play in archaeology. I have always thought that the work of the ‘diggers’ is so often overlooked, with hardly a mention in the finished reports. To me, the excavation and retrieval of the initial data and the finds – the evidence on which the results depend – is the most important part of any project. I was told once by a project manager of mine that ‘anyone can dig’. Yes, anyone can dig holes and remove vast quantities of soil, but it takes the skill, diligence, an understanding of stratigraphy and sometimes, in my opinion, the integrity of the excavator to do the job properly. If the data and records are flawed, the results, the conclusions and, at the end of the day, the entire story of the site, will also be incorrect.

Through CAT’s RO status with CIfA my CPD has become an important and valued aspect of my role within the organisation. I have recently completed courses in CAD, Asbestos Awareness and Confined Spaces Training, First Aid, and the Site Supervisor Training Scheme, all of which are employer funded and in work time. I also have access to both external and in-house courses on many subjects including report writing and Roman pottery, most of which are presented by our own in-house specialists.